Nobody wants to read but everyone wants to write 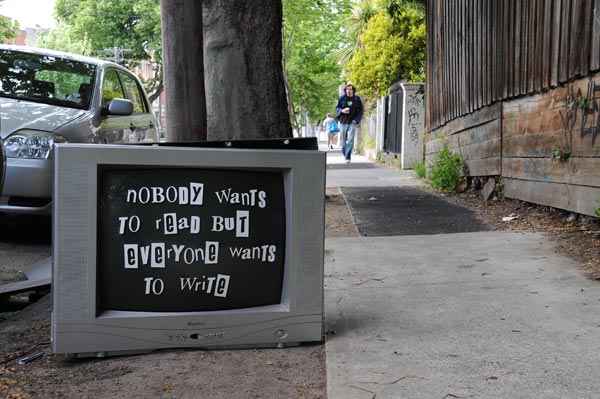 "Nobody wants to read but everyone wants to ....What?" came a voice from behind Feedme who was sitting in the dirt applying the last five letter.
"Write, everyone wants to write" replied Feedme.
"I hope that's not true" responded the elderly gentleman in an accent that clearly placed his country of birth in Eastern Europe.
"I'm writing a book and I want lots of people to read it".
"What's the book", asked Feedme before applying the missing word.
"It's about about the Aboriginal people I worked with in Central Australia for 25 years and it's a very good story".

feedme
Melbourne
I make art by quoting other people. I glean text from cyberspace and reposition these words on TVs that have been dumped in the street. I take a photo, post it on my blog and then make a link to the original source creating new contexts and re-lationships between the web and the street. Thanks for the quotes. Feedme